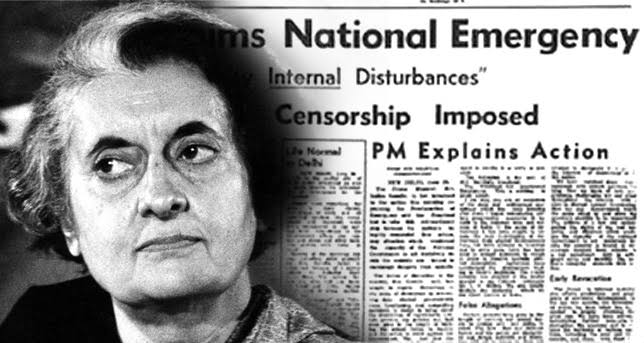 Today marks the 45th anniversary of a day that is remembered by many as the doomsday for the Indian democracy. Prime Minister Indira Gandhi announced over radio that the President had declared an emergency under Article 352 of the Constitution of India because of turmoil and incipient rebellion in the country.

Interestingly, before the Emergency was declared, neither the governors’ reports to the President nor the Chief Ministers’ to the Home Ministry indicated that the law and order situation was out of hand. The Home Ministry, whose primary function was to monitor the internal situation, had not expressed concern to the Prime Minister. [1] As was made clear by the findings of the Shah Commission,[2] the Emergency was declared not to preserve the constitution but to preserve the rule and office of one leader, Prime Minister Indira Gandhi. SS Ray, the then chief minister of West Bengal in his testimony before the Shah Commission stated that Indira Gandhi mentioned him the need to deliver a “shock-treatment” to the country.[3]

It must be acknowledged that the Emergency was not an immediate measure. It was the culmination of multiple incidents that had been taking place in the country around that time namely; large scale protests and student movements in multiple states of the country, railway strikes, deteriorating economy, the supremacy clash between the legislature and the judiciary and most importantly, threat to Prime Minister Indira Gandhi’s political authority and office which was aggravated by the ruling of the Allahabad High Court on 12th June, 1975 in the election case wherein the Court found her guilty of corrupt election practices.

The statement cited in the opening portion of this article is special because it serves as a reminder as to how a constitutional provision of rare import was used to destroy the very scheme and values inherent to the constitution itself. This article briefly describes 5 developments that took place during the emergency era which snuffed out democracy.

As is evident from multiple interviews and reports from that time, Prime Minister Indira Gandhi did not consult the cabinet before the imposition of emergency. Instead, as mentioned in the Shah Commission Report, she chose the route available under Rule 12 of the Government of India (Transaction of Business) Rule 1961, which allowed the Prime Minister to depart from rules and thereby take actions to be ratified by the Cabinet subsequently.

This action was clearly against the constitutional scheme which required the President to act on aid and advise of the Council of Ministers, not on the advice of the Prime Minister alone. The Shah Commission also concluded that Rule 12 could not be used to bypass other rules imposing an obligation upon the Prime Minister to consult the cabinet before the proclamation of an Emergency.

Almost all political rivals of the Prime Minister and popular protest leaders were arrested under draconian preventive detention laws such as MISA (Maintenance of Internal Security Act), Defence of India Act/ Defence of India Rules and COFEPOSA (Conservation of Foreign Exchange and Preventing of Smuggling Activities Act).

A series of Ordinances introduced post the imposition of emergency made the already draconian laws extremely arbitrary in nature. For example; one of the ordinances relating to MISA barred the courts from applying the concept of ‘natural justice’ in detention cases and also stated that an individual could be detained without disclosing to him or her the grounds of such detention or allowing representation against such detentions. [4]

Another example could be the amendment brought to COFEPOSA which provided that a detention was not void even if the grounds were ‘vague’, ‘non-existent’ or ‘not relevant’. Furthermore, the permitted period of detention under the Act was extended to two years and allowed one year before a case had to be reviewed by an Advisory Board.[5]

Adding to all this, a presidential order was issued on June 27, suspending the right to move the courts for enforcement of the fundamental rights under Article 14, Article 21 and Article 22.

To put it in simpler terms; the government could detain anyone without providing substantial reasons and the individual wouldn’t even have the recourse to the Courts against such arbitrary detention. These draconian laws were in complete disregard of the rule of law.

Preventive detention laws were just one of the many ways in which freedom of speech was barred during the emergency period. Other measures such as the orders of the Home Ministry prohibiting the publication of news about detentions or government measures without authorisation of the Government and “Prevention of Objectionable Matter Ordinance” under which the government could demand security from presses if they published any newspaper or book containing ‘objectionable matter (the contours of the term being extremely wide) further damaged the freedom of press. Naturally, the government vide another order suspended the right of citizens to move to Courts for preservation of free speech and other freedoms under Article 19 of the Constitution.

Perhaps, the most disturbing feature of the emergency era is how the power to amend the Constitution was used as a measure to protect and shield the office of the Prime Minister. To summarise these sinister amendments; the 38th Amendment, passed in July 1975 barred judicial review of proclamations of emergency. It also barred judicial review of ordinances promulgated by the President or the Governors and laws enacted during emergency.

The 39th Amendment removed the power of the Supreme Court to adjudicate election petitions concerning the Prime Minister or Speaker of the Lok Sabha. This was obviously done to prevent any unfavourable judgment from the Supreme Court in her appeal against the decision of the Allahabad HC in the election case. In fact, to ensure that her election is not threatened in any manner, Prime Minister Gandhi brought about amendments in the Representation of Peoples Act as well, which basically stipulated that anyone found guilty of election malpractices could go to the President for determination as to whether such person should be disqualified or not. S.P. Sathe, leading constitutional law authority, termed these amendments as extremely personal and enacted with the sole objective of protecting one’s own interests.[6]

The 41st Amendment Act which basically barred any civil or criminal proceedings against a person who is or has been the President, Prime Minister or governor for “acts done by him, whether before or after entering his office”, acted as the final nail in the coffin.

Then comes the infamous 42nd Amendment, often termed as “mini constitution” for the massive changes it brought about to the scheme and structure of the constitution. The amendment completely excluded the courts from hearing election disputes. Under the Amendment, precedence was given to Directive Principles over Fundamental Rights. Another article, Article 32A prohibited the Supreme Court from considering the constitutionality of a state law unless the validity of central law was also at issue. A new article 31D stated that no legislation preventing or prohibiting “anti-national” activities could be deemed to be void on the ground that it is inconsistent with, or takes away or abridges any of the rights conferred by, Article 14, Article 19 or Article 31. Courtesy to the change brought about in Article 74, the President was now bound by the advice of the Council of Ministers. Centre-State relations were also altered by denying High Courts the power to rule on constitutionality of Central laws. One of the most drastic changes brought about by the 42nd Amendment was the taking away of the Supreme Court’s power to review Constitutional Amendments.

Talking about the 42nd Amendment, leading constitutional law authority Granville Austin remarked: “The shift in the balance of power within the Constitution made it all but unrecognisable.”[7]

The fundamental issue before the Court in ADM Jabalpur, popularly known as the “Habeas Corpus Case”, was whether the use of the Habeas Corpus (a petition filed by a person challenging his detention) could be barred by the executive (as had been done by the June 27 Presidential Order) or by Parliament except in the manner provided by Article 368 of the Constitution. The state was the petitioner in the instant case.

The respondents argued that the Executive could not interfere with the liberty of an individual unless it could support its legality in a court of law. They also asserted the instant detentions were not only violative of Article 21 but the Constitution as a whole.

The majority, in a judgment that would often be termed as the darkest moment in the history of the Supreme Court, ruled that no citizen had a standing right to move a writ of Habeas Corpus before a High Court under Article 226 of the Constitution in light of the June 27 Presidential Order or to challenge a detention order as illegal or legally malafide.

Justice Khanna dissented and famously remarked: “Law of Preventive Detention, of detention without trial is an anathema to all those who love personal liberty”.