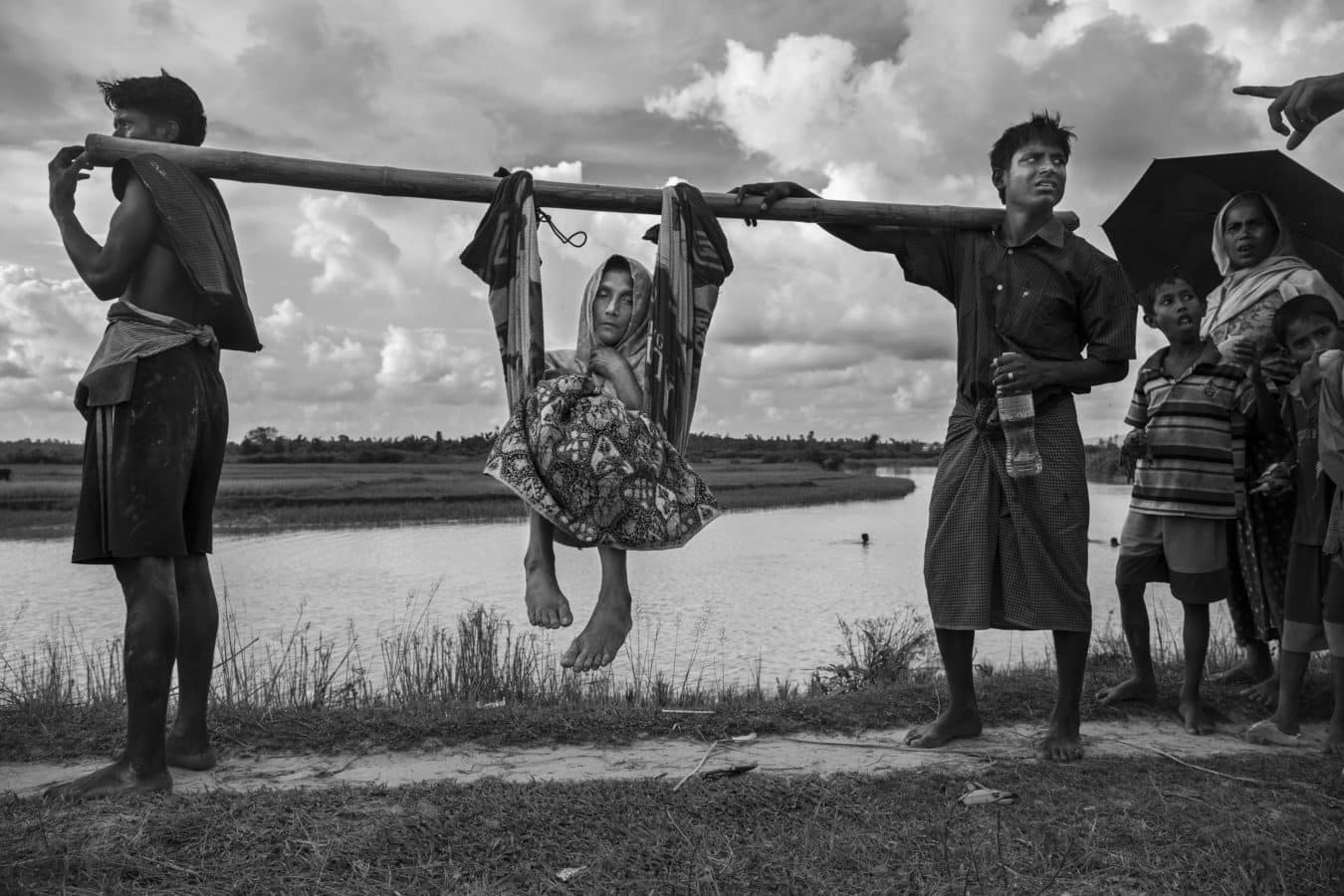 The Myanmar Government and entities controlled by them have caused the displacement of at least 750,000 Rohingyas from Myanmar’s Rakhine State into Bangladesh. There have been several instances of violence like destruction of property, torture, rape, militant conflicts, etc. which led to the application by The Gambia before the International Court of Justice (‘ICJ’) alleging violations of the Convention on the Prevention and Punishment of the Crime of Genocide, 1948 (‘Genocide Convention’). The ICJ provisionally ordered Myanmar to ensure that its agencies complied with its obligations under the Genocide Convention, to protect all related evidence and to issue a report on all subsequent measures taken by it. Recently in May 2020, Myanmar submitted this report to the ICJ.

This post follows the events that led to this case, the ICJ’s ruling and reasoning therefore, and Myanmar’s report.

The Rohingya have lived in Myanmar since the 12th century. However, the current regime claims they migrated there illegally during the British colonial rule. After Myanmar’s independence, the Rohingya’s ancestral homeland became Arakan State, and was renamed Rakhine State in 1990. The Rohingya had their nationality stripped in 1982, making them stateless, and they were disenfranchised in 2015. This led to tensions within the Rohingya community, and notably some of them staged an insurgency against the persecution. Consequently, after 2017, the nature of this persecution became far worse. These included torture, rape, other serious humanitarian violations; destruction, confiscation and construction on Rohingya property; restrictions on movement and livelihood including forced and compulsory labour; violations of security and safety; and violations by the armed forces. The Independent International Fact-Finding Mission on Myanmar (‘Fact-Finding Mission’) of the United Nations’ (‘UN’) documented these crimes., and their report concluded that “Myanmar incurs State responsibility for committing genocide” and “continues to harbour genocidal intent and the Rohingya remain under serious risk of genocide” (p. 69, ¶ 213).

The United Nations General Assembly (‘UNGA’) recognised the Fact-Finding Mission’s report and expressed concern over the situation in Myanmar. These acts have also been documented in other UN reports and resolutions, as well as by other international agencies such as Human Rights Watch and Amnesty International.

The Fact-Finding Mission also welcomed the efforts of The Gambia, Bangladesh and the Organisation of Islamic Countries (‘OIC’) to pursue a case against Myanmar before the ICJ, for violations under the Genocide Convention. The Gambia called upon Myanmar before the OIC “to take all measures to immediately halt all vestiges and manifestations of the practice of…genocide…against Rohingya Muslims.”

The Gambia stated at the UNGA that it was “ready to lead the concerted efforts for taking the Rohingya issue to the International Court of Justice.” Myanmar addressed the assembly two days later characterizing the Fact-Finding Mission reports as “biased and flawed, based not on facts but on narratives”.

On 11 November 2019, The Gambia filed an Application instituting proceedings against Myanmar, alleging violations of the Genocide Convention and requesting the indication of provisional measures connected therewith. In this application, it made a request for six provisional measures, as observed in the ICJ Order (¶12).

Myanmar raised multiple arguments for dismissal of the case, however each failed to convince the Court. It sought to have the case dismissed as there existed no ‘dispute’ relating to Art. IX of the Genocide Convention (which empowers contracting parties to refer to the ICJ, ‘disputes’ relating to the interpretation, application or fulfilment of the Genocide Convention, including responsibility of a State for genocide). The ICJ rejected these arguments, noting that there had been disagreements between the parties (notably at the UNGA) as to the nature and existence of the violations. Myanmar’s other argument dealt with the reservation that it made to Art. VIII, which empowers contracting parties to call upon all competent organs of the UN to prevent and suppress all acts of genocide. Myanmar tried to argue that the phrase ‘organs of the United Nations’ should include the ICJ, and as such, Myanmar’s reservation should render the case liable to be dismissed. However, The Gambia argued such an interpretation would render the meaning of Art. IX nugatory – in respect of which Myanmar had not made a reservation. The ICJ agreed that the words of Art. VIII had a wide scope but that such disputes were intended to be specifically addressed by Art. IX, and in light of Myanmar’s non-reservation thereof, it rejected Myanmar’s argument (¶¶30-35).

Myanmar argued that the true applicant must be Bangladesh since it has suffered direct injury as the neighbouring country where Rohingyas have had to flee, but that Bangladesh is prevented from doing so due to its reservation of Art. IX. However, the ICJ reasoned with The Gambia that obligations under the Genocide Convention are obligations erga omnes partes, such that any State party to the Genocide Convention is entitled to invoke the responsibility of another State party for the breach of its obligations, without having to prove a special interest (¶¶39-42).

The ICJ went onto examine whether the provisional measures sought should be indicated. The Gambia argued that the provisional measures are needed as its complains are capable of being characterised at least plausibly as genocidal, and that it was not necessary for the ICJ at this stage to establish with certainty that genocidal intent was the only plausible inference. Myanmar contended that the ICJ should indicate provisional measures only if the claims put forward by The Gambia are plausible, and in determining so, The Gambia must establish that there existed genocidal intent. As per Myanmar, The Gambia failed to furnish sufficient evidence in that respect. The Court rejected this and held that the standard claimed by Myanmar is not one that needs to be satisfied at this stage (¶¶46-47, 60-61).

On 23 January 2020, the ICJ ordered Myanmar (a) to ensure the prevention of genocide; (b) to ensure all agencies under it do not commit acts of genocide or acts relating thereto; (c) to safeguard any evidence material to the proceedings; and (d) to report on the measures taken by it to comply with these directives within four months, as from the date of the order, and thereafter every six months, until a final decision on the case is rendered by the Court (¶86).

The last measure, which requires Myanmar to regularly report to the Court on its implementation of the interim orders, is of particular importance to ascertain Myanmar’s willingness to comply with the order itself. The possibility that Myanmar may not submit all of its reports, or that it may include inaccurate information or take unsatisfactory actions, is not unlikely, and extremely worrisome. While the ICJ’s decisions are binding, including its orders on provisional measures, the ICJ has no means of enforcing them itself. With written submissions expected to go on until at least 25 January 2021, the nature of compliance (if any) of these provisional measure is paramount, and will inevitably have an effect on further response taken by the international community.

On 22 May 2020, Myanmar submitted its first report. The same was confirmed by the ICJ through its official twitter handle. It was also confirmed by various news articles, claiming that the contents of the same shall remain confidential until such time as the court officials decide. While the report is not publicly available, we can at least hope that The Gambia’s approval (or disapproval) of it will be made in the public domain.

A news article by Burma News International claims that “the country is not obliging to the four-point ICJ provisional order” and “the situation on the ground doesn’t look like that the Myanmar government is adhering to the provisional measures of the ICJ”. In so stating, it has also referred to a report by The Guardian that showcased satellite imagery showing some 140 buildings that were burnt in March 2020, amongst other such acts of genocide. The report also highlighted various acts of violence against the Rohingyas in the months following the order by the ICJ. As recently as 13 May 2020, two Rohingya children were killed due to landmines planted owing to the raging conflict. In fact, several such reports have also been made by the Burmese Rohingya Organisation UK, highlighted in its May 2020 Briefing titled ‘A continuing genocide’.

If the same is true, the UN must not stand idle. Its failures and inaction in the Rwandan genocide still haunt the institution, which has the responsibility to safeguard international peace and security. It cannot let history repeat itself.

It will take the ICJ years to render its final judgment. Further, whether Myanmar will absolutely respect the judgment (assuming the same is adverse) is a foreseeable uncertainty. Affirmative action, perhaps by the Security Council is needed. While lives are lost daily, former Prime Minister of Malaysia Datuk Seri Najib Razak’s words at the OIC session on the Rohingya situation must be remembered, “whosoever killeth a human being…it shall be as if he had killed all mankind, and whoso saveth one’s life, it shall be as if he had saved the life of all mankind” (sūrat-al-māidah).

At the very least, it is laudable that Myanmar has provided its report. In compliance with the ICJ’s provisional measures, Myanmar has sought to bring an end to the persecution through two Presidential Directives. The first (Directive No.1/2020) orders government entities to not commit acts defined in the Genocide Convention. The second (Directive No.2/2020) prohibits government entities from destroying or removing evidence of genocide. However, these directives have brought little change.

In the author’s opinion, it is difficult to expect the persecution against the Rohingya to be ceased immediately and in its entirety, especially when it is prevalent across all levels of the hegemony. The international community needs to take more effective and assertive measures. The International Criminal Court (‘ICC’) can initiate investigations against the perpetrators of these alleged crimes of genocide. The prospect of individual criminal responsibility is far more effective than merely holding Myanmar in breach of the Genocide Convention and ordering it to comply with the same. While Myanmar is not one of the parties to the ICC Rome Statute, the Security Council can (and has in the past) – through its extraordinary powers under Chapter VII of the UN Charter (as referred in the Rome Statute) – have the ICC investigate and then prosecute these alleged crimes. Additionally, there is ample evidence that genocidal acts and other humanitarian violations have been committed. The Security Council must, relying upon that, resolve to have UN Peacekeeping Forces deployed in Myanmar, as it has in similar erstwhile situations in Rwanda and Srebrenica.

(This post has been authored by Yash Shiralkar, a final-year student at Government Law College, Mumbai)
Cite as: Yash Shiralkar , ‘The Next Step in the Rohingya Genocide: Myanmar’s Report to the ICJ’ (The Contemporary Law Forum, 26 June 2020) <http://tclf.in/2020/06/26/the-next-step-in-the-rohingya-genocide:-myanmar’s-report-to-the-icj> date of access.
Facebook15Tweet0LinkedIn0Print0Email0
Tagged: Genocide Convention/ICJ/Myanmar/Rohingya/UNSC