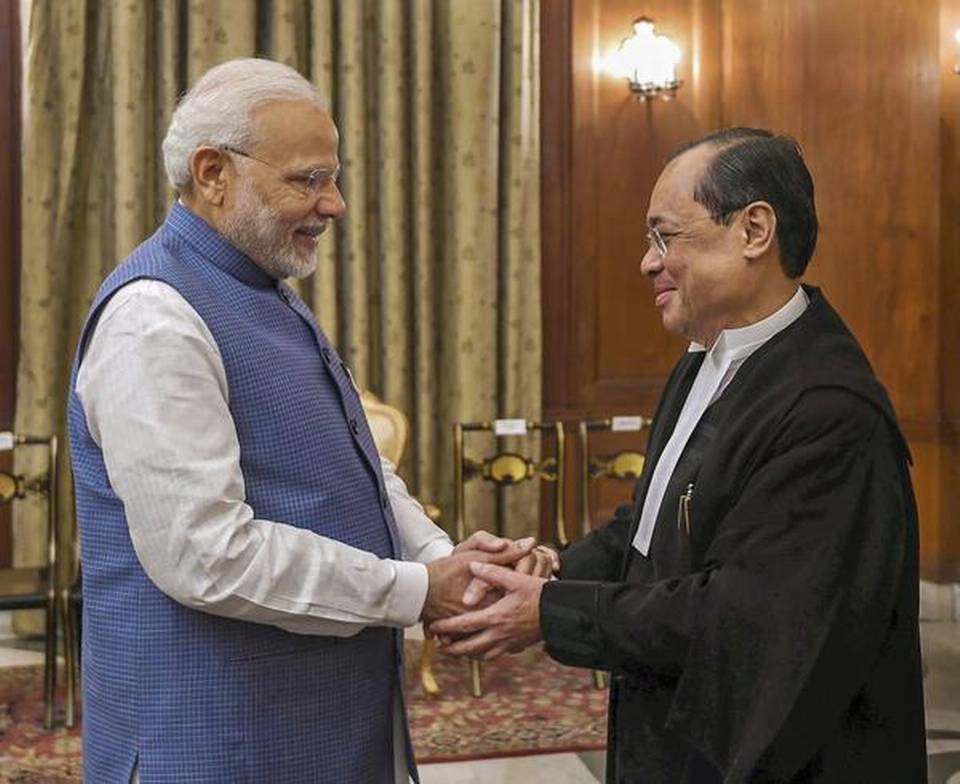 Contents hide
1 Introduction
2 Past Instances
3 Reasons for Criticism: Legal or Theoretical?
3.1 Principle of separation of powers
3.2 Rendering judgement in sensitive cases
3.3 Independence and Integrity of the Judiciary
3.3.1 FOOTNOTES

On 16th March 2020, the President of India, Shri Ram Nath Kovind, nominated the former Chief Justice of India (CJI) Ranjan Gogoi to the Rajya Sabha in exercise of the power conferred to him under Article 80(1)(a) of the Constitution of India,[1] read with clause (3) of the same article.[2] The nomination was accepted by Mr. Gogoi the very next day, citing his “strong conviction that the legislature and the judiciary must, at some point of time, work together for nation-building”. However, this acceptance was met by criticism across the nation, which has raised concerns over the independence and impartiality of the judiciary.

In a nation like ours where the Constitution is upheld to be the supreme law of the land, the judiciary plays an important role in protecting citizens’ rights against the vested interests of the government. Against the backdrop of the doctrine of separation of powers, this function of the judiciary enables citizens to not only blindly trust the organization, but also hold judges in high esteem. In such a scenario, news confirming the appointment of Mr. Gogoi to the Rajya Sabha within only four months of his retirement, is highly troubling.

Mr. Ranjan Gogoi is the first former CJI to be directly nominated to the Rajya Sabha. However, contrary to popular belief, the practice of appointing former judges to governmental positions at the State and Central levels is not unprecedented. While the direct appointment of Mr. Gogoi may be the first of its kind, several variations of such instances remain documented in history. Eminent judges like former CJI P Sathasivam became the governor of Kerala in 2014 within four months of his retirement from the Supreme Court. Former CJI Ranganath Misra contested Rajya Sabha elections on the ticket of a prominent national political party, seven years after his retirement.

Even in the past, such controversial appointments have been severely criticized because they are seen as concessions or rewards granted by the government to these judges who have decided important cases during their tenure. While it may not be true that they deliberately sided with the government in these cases, the evolution of conspiracy theories is difficult to avoid seeing the suspicious timing of these appointments. The very same incidents prompted the former Union Finance and Law Minister, late Mr. Arun Jaitley to remark that “pre-retirement judges are influenced by post-retirement jobs.”

Reasons for Criticism: Legal or Theoretical?

Technically, the appointment of Mr. Gogoi is constitutionally valid[3] as judges are eminent luminaries in the profession of law, which is often regarded as a kind of social work.[4] Even article 124(7)[5] does not create a bar or disqualification for a Judge of the Supreme Court to offer his candidature for membership or to become a Member of Parliament.[6] Yet, the criticism meted out in response to this news makes one desirous of analysing the reasons behind it.

Principle of separation of powers

Montesquieu’s doctrine of separation of powers is recognized as the bedrock of Constitutions around the world. It distributes power among the three organs of the government- legislature, executive and judiciary- so as to create a unique system of checks and balances. The underlying logic is that if the same body is invested with all the powers, then it will lead to tyranny. This allows each organ to function independently, while protecting the liberty of citizens to the greatest possible extent.

The theory of separation of powers signifies three formulations of structural classification of governmental powers:

Given the complex functioning of modern-day governments resulting in interdependence, it is almost impossible to implement this doctrine rigidly. Hence, several Constitutions have adopted this doctrine with certain variations. In India, this was emphasized by the Supreme Court in the case of Ram Jawaya v. State of Punjab[7]. The doctrine has been recognized as a part of the basic structure of Indian Constitution in the case of Kesavananda Bharati v. State of Kerala.[8]

Thus, the doctrine of separation of powers protects citizens’ rights from being encroached by the exercise of arbitrary authority. The judiciary in itself plays a crucial role in safeguarding people’s liberties, especially with the rise of judicial activism. In light of all this, accepting a legislative position almost immediately after having served in the capacity of the Chief Justice of the country, is sure to raise more than a few eyebrows and questions amongst the public.

Mr. Ranjan Gogoi has headed benches which have decided several important cases in the past two years. Amongst them are the Babri Masjid-Ayodhya temple judgement, the Rafale deal judgement and the Sabarimala judgement. Almost all these judgements have been decided in favour of the government. While this may not have been suspicious at the time, allegations now point towards the nomination being a reward from the government in return for his service. Such allegations threaten to ruin not only Mr. Gogoi’s credibility, but also the credibility of the judiciary as a whole.

Independence and Integrity of the Judiciary

The independence and integrity of the judiciary lays a strong foundation, upon which rests the faith and respect of a billion Indians. People believe that the judiciary protects them from the exercise of arbitrary power of the government, having seen it in the past through various landmark judgements. Judges have always recused themselves from rendering political opinions, for fear of being viewed as biased while pronouncing judgements in cases where the government is one of the parties. Being servants of the temple of justice, they have to present a united front against all other forces (including public opinion) which can threaten to corrupt power. The Constitution itself ensures independence of the judiciary in multiples ways, be it through judicial review,[9] appointment of judges through the collegium system,[10] protecting their tenure[11] or punishing contempt of judiciary.[12] Hence, an independent judiciary is expected by every citizen of the country and is also a part of the basic structure of our Constitution.[13] It helps to maintain rule of law, thus making our democracy a successful one.[14]

As a result, when a former CJI is appointed as a Member of Parliament, it threatens to destroy the legacy which the judiciary has built over the course of so many years by distancing itself from other institutions and controversies. Even when a judge retires, he continues to remain an important part of the legal fraternity. Moreover, he is aware of the internal functioning of the judiciary by virtue of his office which is not made transparent for obvious reasons. When such a member crosses over this divide to step into a legislative capacity, it is bound to invite criticism, even from jurists. It then only remains to be seen if this judicial independence and integrity is actually protected or not.