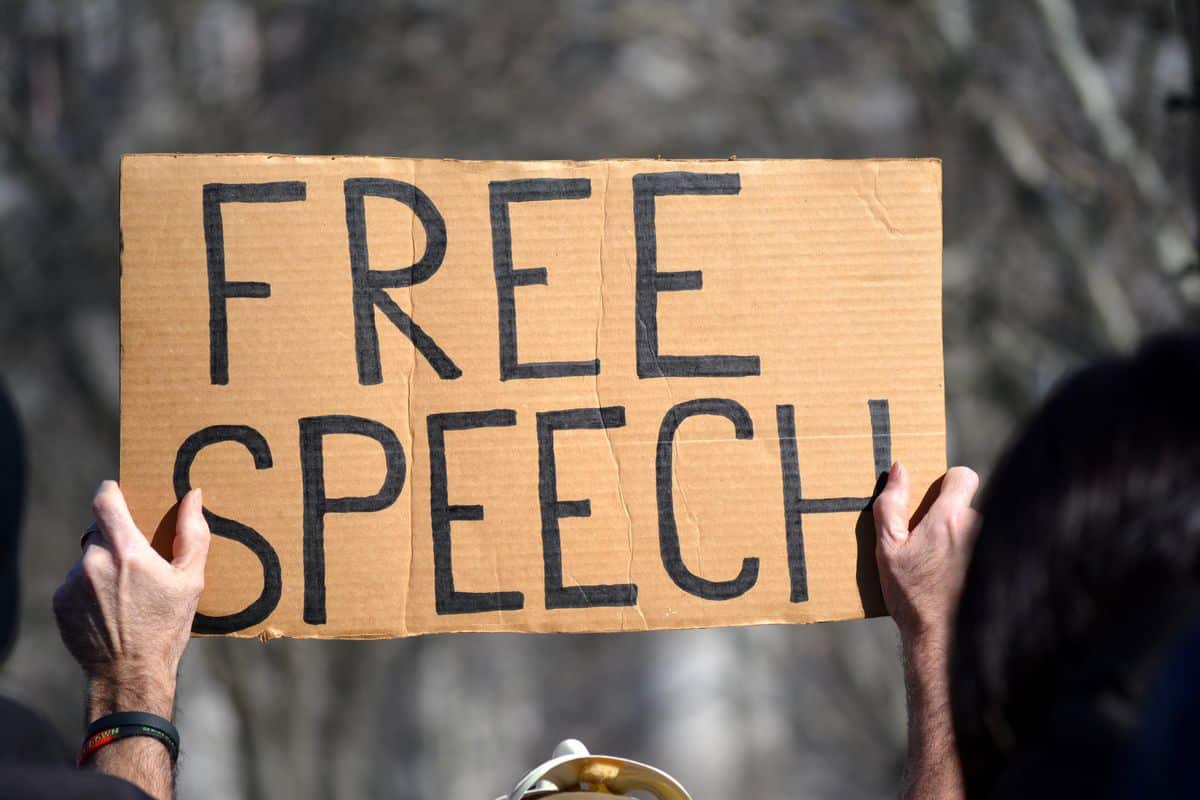 The Central Government on 8th August, 2019 notified an amendment titled UNLAWFUL ACTIVITIES (PREVENTION) AMENDMENT ACT, 2019 (hereinafter ‘UAPA’), which has been in the midst of various discussions across the country and surely again during the COVID-19 pandemic, this legislation has found its way to the public discourse due to journalists being charged under the UAPA.

Democracy around the world is engineered on the principle of “for the people, by the people, of the people” as quoted by Abraham Lincoln. One of the basic rights which ensures that democracy continues for the benefit of the people is the right to express one’s thoughts freely. In India, free speech is guaranteed through Article 19 (1)(a) which states that “All citizens have a right to freedom of speech and expression”. This right extends its protection to media which has been accorded the status of the “fourth estate” of democracy.

The media acts as a mechanism to help create a system of checks and balances over the government, by showing public opinion and ground realities. Investigating journalism acts as a watchdog and protects public interest through sting operations or unearthing scams and government malpractices. Even during the Indian Independence Movement, struggling newspapers like “Kesari” and “The Hindu” were a vocal critique of the state’s brutalities, which often made them a subject of the British Government’s witch hunt. Not to forget that the entire UPA-II regime had to see a mighty fall because of the media exposing massive corruption within major public departments and covering the India Against Corruption Movement by Anna Hazare. In this context, it becomes important to analyse the effects of the 2019 Amendment on the much valued right of freedom of speech and expression.

UAPA’S EFFECT ON FREE SPEECH AND OTHER FUNDAMENTAL RIGHTS

An Independent India saw a surge in media platforms. However, the constant condemnation of government meant that journalists and media personalities were still placed under invisible cuffs of restrictions by the State which constantly applied indirect pressure. Perhaps, the first instance of curbing media’s free speech was in the year 1950 when Romesh Thappar criticized the then Prime Minister Nehru in his journal “Cross-Roads”. Nehru retaliated by banning the journal. The Hon’ble Supreme Court ruled in Thappar’s favour by observing that – “Freedom of speech and expression includes freedom of propagation of ideas and that freedom is ensured by the freedom of circulation”. Aggrieved by the decision, Nehru government amended Article 19 (2) of the Constitution by including the term “public order” within the meaning of reasonable restrictions. Since then different governments have tried to suppress the free circulation of press and information by enacting different laws.

The most disturbing trend in the last few months has been the witch-hunting of vocal critiques of the current government under the UAPA. The invocation of the provisions of the UAPA against the journalists is nothing but a nail in the coffin of press freedom and freedom of speech. The UAPA Amendment of 2019 empowers the government to declare an individual as a terrorist. Section 35(2) of the said Act reads –

Not only does Section 35(2) restrict freedom of speech and expression when used unfairly as a tool to silence the growing discontent against various government policies but it also infringes upon the right to reputation and dignity enshrined under Article 21 of the Constitution. Through this amendment, the State has the power to declare any individual as a terrorist without providing him with an opportunity to be heard or any other substantive or procedural safeguards. Labelling a person as a terrorist on a mere belief of the government is extortionate, unscrupulous and violates due process. Furthermore, since there is no requirement for stating the reasons for classifying an individual as a terrorist, the government/executive has unfettered power to use Section 35 of UAPA against anyone it deems fit. Subsequently, the arbitrary use of this provision has created a sense of fear among people, especially those who are vocal against the government. Fear of being categorised as a terrorist harms freedom of speech and expression of an individual because once a person is identified as a terrorist the stigma attached with such classification remains life-long. Therefore, it would be safe to argue that the probable dangers of this unregulated and unfettered power itself are enough to attack the constitutionality of this Amendment.

It is undeniable that India’s delicate geographical position and history of internal communal disharmony requires India to have strong anti-terror laws which allow the investigative/law enforcement agencies to have power in order to prevent large scale forceful attacks on the people of India. This has been recognised by the various decision of the Supreme Court. For instance, the validity of the Terrorist and Disruptive Activities (Prevention) Act, 1985 (TADA) and The Prevention of Terrorism Act, 2002 (POTA) was upheld in Kartar Singh v. State of Punjab[1] & PUCL v. Union of India[2]respectively. Even though the Supreme Court in Kartar Singh laid down extensive guidelines to ensure that fundamental rights of the accused under the TADA are not grossly violated, the Parliament abrogated POTA in the year 2004 when reports of its misuse emerged from various states. This shows that the Indian political system as a whole has failed to learn lessons from the disproportionate use of Anti-terror laws to quell government’s opposition. By using UAPA against activists and journalists, the government is reverting to the infamous days of the emergency wherein critiques of the then Congress Government were put behind the bars indiscriminately.

Perhaps, the most pertinent case which highlights the present scenario of disproportionate use of arbitrary power under Section 35 of UAPA is the Supreme Court’s decision in Vijay Narain Singh v State of Bihar[3] where it rejected the previously accepted position in Common law that “those who are responsible for the national security or for the maintenance of public order must be the sole judges of what the national security or public order requires” and held that “our Constitution does not give a carte blanche to any organ of the State to be the sole arbiter in such matters.”

Similarly, in Chintamanrao v. State of M.P.[4], the court observed that – “reasonable restrictions” which the State could impose on the fundamental rights “should not be arbitrary or of an excessive nature, beyond what is required in the interests of the public”. “Reasonable” implied intelligent care and deliberations, that is, the choice of a course which reason dictated. Legislation which arbitrarily or excessively invaded the right could not be said to contain the quality of reasonableness unless it struck a proper balance between the rights guaranteed and the control permissible under Articles 19(2) to (6). Otherwise, it must be held to be wanting in that quality”

On 20th April 2020, the announcement by the police of the State of Jammu and Kashmir that an FIR was lodged against the Kashmiri photojournalist Masrat Zahra under the Unlawful Activities (Prevention) Act (UAPA) cited the posts of the journalist claiming that they were violative of the UAPA’s provisions. The police posted a screenshot of a photograph by Zahra which was uploaded by her on ‘her’ Instagram profile in September 2018.

The abovementioned incident isn’t a singular incident. It was followed by a similar case wherein the same state’s police issued a summons to Peerzada Ashiq, a journalist with ‘The Hindu’ newspaper, for a report published by him on 19th April.

The voice of media, persons who are vocal against the government being stifled is nothing but stifling of the democracy. What can be seen from the aforementioned instances is that the provisions of this Act are being invoked to reduce dissenting opinions rather than to actually control terrorism, which is the real threat to national security.

Though the constitution makers since its inception thought it would be the prerogative of the centre to legislate on matters related to the terrorism and national security, it must be borne in mind that the powers conferred to executive/law enforcement agencies also has an impact on the constitutional scheme. The Amendment has enough to instil unprecedented fear even for genuine opinions and thereby weaken our democracy. Therefore, it is argued that the Amendment requires subsequent alterations to the extent that it does not hamper the fundamental rights of the innocent by regulating the powers conferred to law enforcement agencies and provide procedural safeguards to prevent arbitrary use of these powers. Judicial review cannot and should not, in terms of sufficiency, be the only safeguard available against powers which can have such drastic consequences for an individual.

Lastly, it must be mentioned that restricting Freedom of Speech and Expression on grounds of “National Security” is a legitimate excuse but to quell opposition in the guise of national security is against the very essence of democracy.

(This post has been authored by Sai Krishna Kumar and Aditya Joshi. Sai is an advocate practising in the courts of Delhi. Aditya is a law student at Faculty of Law, University of Delhi)

Cite as: Sai Krishna Kumar and Aditya Joshi, ‘Unlawful Activities (Prevention) Amendment Act: An Attack on Freedom of Speech and Expression ’ (The Contemporary Law Forum, 26 May 2020) <http://tclf.in/2020/05/26/unlawful-activities-prevention-(amendment)-act:-an-attack-on-freedom-of-speech-and-expression > date of access.